Court reporters may seem to play a... 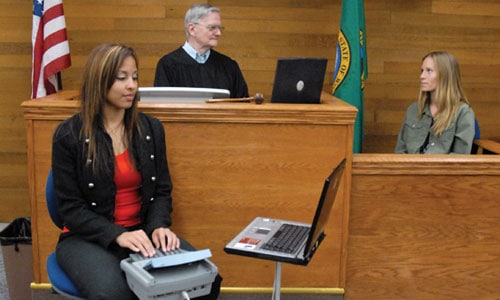 Court reporters may seem to play a minor part in a court room, but in reality, they are integral aspects of the judicial system. The first and most well-known job of a court reporter is to transcribe what happens and what is said in court in real time. This means that they type over 200 words per minute and can decipher speech while several people are talking. While this is the most visible part of the job, it is by no means the only part. Court reporters are responsible for helping the entire court process run more smoothly by gathering information, creating transcripts, helping with essential tasks and even translating cases when appropriate. While typically thought of as working in the court, many reporters work in a courtroom only occasionally and preform the majority of their duties outside of court.

There is a nationwide shortage of court reporters. It is projected that more than 5,000 court reporters will be needed in the profession by 2018. Many states are already experiencing a shortage that is only expected to increase within the coming years. Many millennials have gone through a four-year degree program only to find it difficult to find a job upon graduation. This is not the case for stenographers, who enjoy the benefits of holding a stable and well-paying position in a growing field. According to the National Court Reporters Association (NCRA), the average salary for someone who is just entering the field is $43,000, with salaries expected to experience a 14% increase by 2020.

The reason that there is expected to be such a growing need for court reporters is because of the aging population of current stenographers. In 2014, it was reported that 70% of current court reporters were estimated to retire over the next five to 10 years. The numbers are staggering. A couple of factors have led to such a dramatic retirement rate, one of them being an aging workforce. Well over half of court reporters are over the age of 50 and younger workers are rare within the field. Another factor is the recession, which delayed the retirement of many for a few years and now that the economy has regained stability, those workers are ready to retire in a short period of time.

Consequences of a Worker Shortage

With fewer court reporters, courts have experienced sentencing delays and attorneys have had to wait on transcripts. The shortage can create a slower judicial process as courts wait for reporters to become available and will delay due process in some cases.

There are newer technologies that will support courts through a shortage of stenographers. Digital technology such as speech-assisted and recording systems are often used by courts as a method of transcription. Though digital technology is appropriate in some cases, it cannot surpass the human ear in deciphering mumbling and fast speech, recognizing homophones and transcribing non-native English speakers. Even recorded proceedings must be reviewed to ensure accuracy. Many times, though further technology is incorporated into the judicial process, it is often in conjunction with a trained and experienced stenographer to clarify the transcripts and assist attorneys.

Court recorders generally need an associate degree to acquire the skills needed for a career as a stenographer, but may also be gained through a certificate program or advanced diploma. Programs must comply with licensure requirements, which vary by state. Student learn about communications, English grammar and vocabulary, processing, foundations of law, court reporting procedures, terminology, captioning and transcription preparation. They are required to maintain an accuracy rate of 95% on dictation tests. Some graduates will be required to pass licensing exams before pursuing a job.

With the growing need for court reporters and the adverse career statistics faced by many young workers, stenography remains a great opportunity for a career with strong earning potential and job security. Younger workers can take advantage of the opportunities available to them within the field, and as graduates, they will earn more than just qualifications, they will get a job. It is a meaningful career that makes a big impact. Their presence in the judicial system is necessary to create a smooth and streamlined process and is dependent on their expertise in transcription as well as the many other jobs they perform.