A court reporter is a vital part... 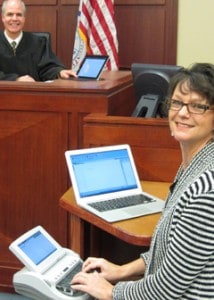 A court reporter is a vital part of the legal justice system. Court reporters are necessary in all hearings and proceedings that require a completely accurate and thorough written record of all that was said, called a transcript. Most people are probably familiar with the classic image from movies and television, of a court reporter typing rapidly on a small machine to get down all the questions and answers. Not as many people know the court reporting basics that go into the job.

How Do They Do It

To anyone who has every had their typing speed tested, and come up with a respectable speed of 60 or 70 words per minute, or a fast speed of 90 or more words per minute, the thought of capturing normal speech at the pace of conversation is intimidating. People speak at a speed of hundreds of words per minute, so how can anyone type down all the words as they are being spoken with accuracy?

The answer is stenography. A standardized shorthand system for noting down sounds and symbols that represent all the words that are spoken in conversation, stenography allows a reporter to take notes at the speed of speech, and then convert the notes into a written transcript of all the full words that were spoken at the hearing. Originally done by hand on paper, a stenography machine speeds the process even further.

Similar to a small typewriter, the stenography machine has buttons that are used in combinations for all the symbols of the shorthand system. The court reporter types while listening, to capture the flow of the words live as they are spoken. Court reporters generally are also notary publics, able to certify documents and notarize signatures.

How Do They Learn To Do It

Stenography schools provide students with the technical knowledge and practical training needed to understand the shorthand language and operate the machinery required in the job. The education also includes principles of law and basic terminology that the students will hear often in their work.

Technical changes have changed some of the ways that court reporters do the work, with audio recording to supplement the written record and computers that convert the shorthand into correct English as the reporter types. With changes in technology come changes in education. Distance learning opportunities alter the field for aspiring court reporters. State certification requirements vary somewhat from state to state.

The National Court Reporters Association (NCRA) has set accreditation standards for certified court reporters and schools. Some schools require students to demonstrate proficiency in keyboarding or data entry skills as a prerequisite to entry. The classes include keyboarding skills, machine proficiency, vocabulary, proofreading, legal and medical terminology, ethics, dictation and much more. A crucial part of the education is practice on the stenotype machine, as a minimum speed of 225 words per minute is required of the profession.

After completing the requirements of the school, a student receives a certificate from the NCRA. A certified shorthand reporter license is mandatory, as well, for the court reporter who wishes to work in the courtroom. Different states have varying licensure requirements. Generally, a lengthy written test and a performance assessment on dictation skills are mandatory for licensing as a certified court reporter.

Court reporters use a stenotype machine to accurately record every word spoken during the proceedings. The machine contains 22 unmarked black keys arranged close together, looking almost like a small organ or musical keyboard, more than a traditional typing keyboard. Combinations of the keys are used to create the shorthand symbols for sounds of spoken language. The huge range of the key combinations give the court reporter tremendous ability to rapidly note down the entire flow of a conversation, whether questions and answers, lengthy statements, or rulings and orders from the judge.

In the past, stenotype machines printed the shorthand symbols that the court reporter typed onto a roll of paper. Computers have changed the business, of course, with most reporters now using a connection to a laptop computer with a program that converts the shorthand into words that appear on the screen and can be edited by the stenographer.

The Future of Court Reporting

While some courts have adopted video and audio recording devices to replace or supplement live court reporters, and other technologies have altered the field substantially, the value of skilled people performing verbatim reporting of depositions and court proceedings remains critical. Audio and video machinery alone has limitations and risks of failure. Court reporters remain a valuable part of the justice system and other important business proceedings that require an accurate and thorough record of the event.